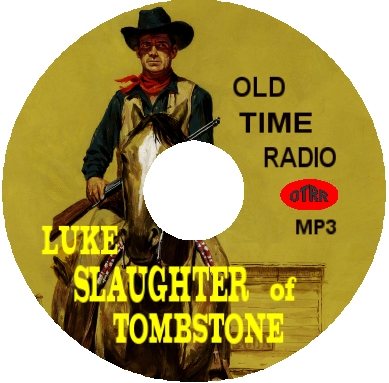 CBS started the year 1958 off with the introduction on January 1, 1958 of Frontier Gentleman. That series lasted 41 broadcasts. Near the end of the year, the network launched Have Gun, Will Travel on November 11, 1958, which continued for 106 programs. In between, a very short series was offered and discontinued after only 16 broadcasts, Luke Slaughter Of Tombstone. Sam Buffington starred as Luke Slaughter, a Civil War cavalryman who turned to cattle ranching in post war Arizona territory near Fort Huachuca. William N. Robson, known from his work with such series as Escape, Suspense and CBS Radio Workshop, directed.

Sam Buffington enacted the title role on Luke Slaughter of Tombstone, another of CBS's prestigious adult Westerns. The series was produced and directed by William N. Robson, one of radio's greatest dramatic directors and Robert Stanley producer was aired from February 23 through June 15, 1958. Buffington portrayed the hard-boiled cattleman with scripts overseen by Gunsmoke sound effects artist (and sometimes scriptwriter) Tom Hanley.

Each program had an authoritative opening statement: "Slaughter's my name, Luke Slaughter. Cattle's my business. It's a tough business, it's a big business. I got a big stake in it. And there's no man west of the Rio Grande big enough to take it away from me." Junius Matthews was heard as Slaughter's sidekick, Wichita.

In his first adventure, tough-as-nails westerner Luke Slaughter guarantees he will bring a cattle herd to Tombstone despite the threats of rustlers and a spy among the ranks of his cowboys. Like the other CBS radio westerns, Have Gun, Will Travel or Frontier Gentleman, this one had plenty of action, the productions were well done and well acted. Luke Slaughter was cut short, like a lot of other radio shows, by the steady pressure from TV.

This CBS western series was only a short 16 broadcasts before ending. OTRR Release Information:

Reviewer: Alonzo Church - favoritefavoritefavorite - November 16, 2012
Subject: A Bit of a Bore
Luke Slaughter, rough tough cattleman, is the lead in this paint by numbers adult western. The fine, Gunsmoke inspired sound effects do not make up for the predictable plots, a hero without personality, and the inevitable Gabby Hayes inspired sidekick. For OTR Western enthusiasts schooled on Gunsmoke, the lack of grit or the slightest hint of a moral dilemma for our granite jawed hero will prove disappointing.
Reviewer: mixiearmadillo - favoritefavoritefavoritefavorite - April 8, 2009
Subject: Agree with both reviews
Slightly more "juvenile" than Gunsmoke or Fort Laramie (though nothing like "kid westerns in that regard), slightly more formulaic and with a definite whiff of cheese here and there, but all in all a really enjoyable show. Luke Slaughter (as you might guess from the name) is absolutely in the vein of the archetypal western where men are men and heroics are fairly predictable.
Sam Buffington pulls it off in fine style, and Junius Matthews (best known for later Disney voice character acting, particularly as the voice of Rabbit in the Winnie the Pooh films) does "western codger" like few else.
Hugely enjoyable for Western fans, and highly recommended.
Reviewer: Shadows_Girl - favoritefavoritefavoritefavoritefavorite - September 14, 2008
Subject: Luke Slaughter is THE MAN!
Actually I have to disagree slightly with the previous reviewer. Luke Slaughter is much like the heroes of the Louis Lamour books like the Sacketts and the Chantrys---much more enjoyable than GUNSMOKE (which could be awfully boring at times...same stuff over and over too much of the time),

And Sam Buffington (who played the lead) has the BEST voice for a Western Hero. (If you're wondering what he looked like you can catch him in that classic of Sci-Fi Cheese "INVASION OF THE SAUCER MEN" on Google Video in the role of Colonel Armrouge.
That's a pretty good flick for OTR fans since Lyn Osborn (Cadet Happy of SPACE PATROL) is also in it (though he spends the first half of the movie asleep and trying to ignore his friend (played by Batman's Arch Nemesis "The Riddler"---on the Adam West series---aka Frank Gorshin) who claims to have found both a flying saucer and the body of an alien.

(All these people are, sadly, no longer with us. The saddest loss is Sam Buffington himself, who committed suicide in 1960.)

Uploaded by OTRRArchive on September 6, 2006